Radiation therapy is commonly applied to the cancerous tumor because of its ability to control cell growth. Ionizing radiation works by damaging the DNA of cancerous tissue leading to cellular death. To spare normal tissues (such as skin or organs which radiation must pass through to treat the tumor), shaped radiation beams are aimed from several angles of exposure to intersect at the tumor, providing a much larger absorbed dose there than in the surrounding, healthy tissue. Besides the tumour itself, the radiation fields may also include the draining lymph nodes if they are clinically or radiologically involved with tumor, or if there is thought to be a risk of subclinical malignant spread. It is necessary to include a margin of normal tissue around the tumor to allow for uncertainties in daily set-up and internal tumor motion. These uncertainties can be caused by internal movement (for example, respiration and bladder filling) and movement of external skin marks relative to the tumor position.

Radiation oncology is the medical specialty concerned with prescribing radiation, and is distinct from radiology, the use of radiation in medical imaging and diagnosis. Radiation may be prescribed by a radiation oncologist with intent to cure (“curative”) or for adjuvant therapy. It may also be used as palliative treatment (where cure is not possible and the aim is for local disease control or symptomatic relief) or as therapeutic treatment (where the therapy has survival benefit and it can be curative). It is also common to combine radiation therapy with surgery, chemotherapy, hormone therapy, immunotherapy or some mixture of the four. Most common cancer types can be treated with radiation therapy in some way.

The precise treatment intent (curative, adjuvant, neoadjuvant therapeutic, or palliative) will depend on the tumor type, location, and stage, as well as the general health of the patient. Total body irradiation (TBI) is a radiation therapy technique used to prepare the body to receive a bone marrow transplant. Brachytherapy, in which a radioactive source is placed inside or next to the area requiring treatment, is another form of radiation therapy that minimizes exposure to healthy tissue during procedures to treat cancers of the breast, prostate and other organs. Radiation therapy has several applications in non-malignant conditions, such as the treatment of trigeminal neuralgia, acoustic neuromas, severe thyroid eye disease, pterygium, pigmented villonodular synovitis, and prevention of keloid scar growth, vascular restenosis, and heterotopic ossification. The use of radiation therapy in non-malignant conditions is limited partly by worries about the risk of radiation-induced cancers. 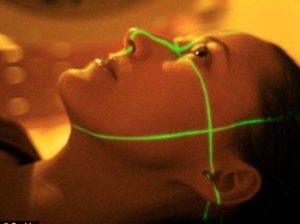 Medicine has used radiation therapy as a treatment for cancer for more than 100 years, with its earliest roots traced from the discovery of x-rays in 1895 by Wilhelm Röntgen. Emil Grubbe of Chicago was possibly the first American physician to use x-rays to treat cancer, beginning in 1896.

The field of radiation therapy began to grow in the early 1900s largely due to the groundbreaking work of Nobel Prize–winning scientist Marie Curie (1867–1934), who discovered the radioactive elements polonium and radium in 1898. This began a new era in medical treatment and research. Through the 1920s the hazards of radiation exposure were not understood, and little protection was used. Radium was believed to have wide curative powers and radiotherapy was applied to many diseases.

Use in non-cancerous diseases

Radiation therapy works by damaging the DNA of cancerous cells. This DNA damage is caused by one of two types of energy, photon or charged particle. This damage is either direct or indirect ionization of the atoms which make up the DNA chain. Indirect ionization happens as a result of the ionization of water, forming free radicals, notably hydroxyl radicals, which then damage the DNA.

The amount of radiation used in photon radiation therapy is measured in gray (Gy), and varies depending on the type and stage of cancer being treated. For curative cases, the typical dose for a solid epithelial tumor ranges from 60 to 80 Gy, while lymphomas are treated with 20 to 40 Gy.